OKOTOKS, AB, July 21, 2021 /CNW/ - (TSX: MTL)  Mullen Group Ltd. ("Mullen Group", "We", "Our" and/or the "Corporation"), one of Canada's largest logistics providers with a wide range of service offerings including less-than-truckload, truckload, warehousing, logistics, transload, oversized and specialized hauling transportation, today reported its financial and operating results for the period ended June 30, 2021, with comparisons to the same period last year.  Full details of our results may be found within our Second Quarter Interim Report, which is available on SEDAR at www.sedar.com or on our website at www.mullen-group.com. 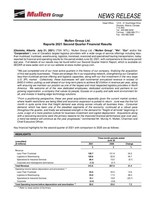 "We just completed one of our most active quarters in the history of our company, finalizing the acquisition of five real quality businesses.  These are strategic fits in our expanding network, strengthening our Canadian less-than-truckload service offering and logistics capacities, along with our first investment in the very large U.S. 3PL market.  Collectively, these businesses will add incremental annualized revenue in excess of $400.0 million, putting us well ahead of our long-term plans to achieve $2.0 billion in revenue per year, along with ensuring we maintain our position as one of the largest and most respected logistics providers in North America.  We welcome all of the new dedicated employees, dedicated contractors and partners to our growing organization, a company that values its people, focuses on a quality and safe work environment for all, and invests in leading edge technology solutions.

"From a positioning perspective, these are great acquisitions especially given the current market context, where health restrictions are being lifted and economic expansion is poised to return.  June was the first full month in quite some time that freight demand was strong across virtually all business lines.  Consumer demand, which has been one of the steadiest segments of the economy, continued at a robust pace throughout the quarter, and finally we witnessed strength in the demand for "freight of all kinds" beginning in June, a sign of a more positive outlook for business investment and capital deployment.  Acquisitions along with a recovering economy were the primary reasons for the improved financial performance year over year, a trend we believe will continue as the year progresses," commented Mr. Murray K. Mullen, Chairman and Chief Executive Officer.

Key financial highlights for the second quarter of 2021 with comparison to 2020 are as follows:

Mullen Group generates cash in excess of its operating needs through a diversified business model combined with a highly adaptable and variable cost structure.  The financial results for the three month period ended June 30, 2021, are as follows:

A summary of Mullen Group's results for the three and six month periods ended June 30, 2021, and 2020 are as follows:

The following summarizes our financial position as at June 30, 2021, along with some key changes that occurred during the second quarter of 2021:

Mullen Group is a publicly traded corporation listed on the Toronto Stock Exchange under the symbol "MTL".  Additional information is available on our website at www.mullen-group.com or on SEDAR at www.sedar.com.